So a few experts including myself have decided to gather together on a weekly basis to discuss mobile. Its a meeting of the minds. My co-conspirators are David Jones (Street Hawk) and David McKeague (Incoming Media).

Our intention is to run a weekly AMA (ask me anything) session on Google Hangouts that anybody can join and ask questions. We want to see what we can ask/share with each other and others can show they can contribute/benefit. Occasionally we’d try to get a special guest to attend. We’re calling it the “Australian Mobile Learning Machine“. This graphic best represents us. 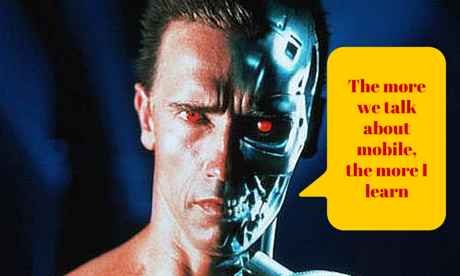 Our goal is to make mobile people outside Silicon Valley just as smart. We may record the sessions and post them on Youtube. We currently figuring out the format and also the conversation dynamic, hence its the learning machine!

Wrap up of the first session

Here is a quick summary of some of the salient points.

1. Notification panel on mobile will be for more than just retention.

We discussed how it could become a view where you can interact with it. For example you might be able to watch a video in the notification panel.

I gave an example of the Evernote widget which can link you to different views from text, camera, photos and a summary of your last notes.

Apple and Google want to control the OS. One theory suggested is that its to combat Facebook’s feed and fb messenger platform. By creating a notification feed, you will spend more time in their operating system.

These are for lowend entry smartphones and tablets in emerging markets. This is Intel’s fight back against QUALCOMM. There has been a flow of talent from QUALCOMM to Intel. It used to be the other way around. There’s more info on the Intel SoFIA here.

3. Which meetups to go to in San Francisco

We discussed how there were open and closed meetups. We know that some VC firms organise closed meetups with their portfolio companies and other invitees with scribes taking notes.

How do we access these closed meetups? David McKeague had been to a Silicon Valley Bank dinner for valued customers. SVB and other service vendors such as law firms can make introductions and setup deals. Citrix has also been able to make introductions. Some co-working spaces like WeWork organise them too.

Check out the Mobile Growth Hackers Meetup in SF. Personally for me, this looks really interesting!

Unicorns are tech companies with a valuation $1BN +. These are meant to be rare. There are more conversations and louder conversations about a tech bubble. It may be 6 months away as opposed to 12 months. This may be due to over valuations and investors not knowing how to value some companies. Previously they were valuing tech companies. Now with these new type of companies that are tech-enabled companies it is more difficult e.g. taxi company such as Uber. It hasn’t been around long enough. Is Uber a tech company, transport company or what is it?!

It may come to a situation where winner takes all in a market. Second tier unicorns may fold or get consolidated. We discussed the difference in dynamics between a marketplace vs enterprise SAAS. In a marketplace like Uber vs Lyft it may be different due to two sided market dynamics. Its a virtuous cycle of demand driving supply and then supply fueling demand. Whereas in enterprise SAAS which has different dynamics there might be 10 players that can co-exist.

How people in the East think very differently about mobile than Westerners. Brief discussion of Xiaomi and how its using a forked version of android.

David Jones mentioned he’d recently interviewed the founders of CodeNgo which helps you submit apps to various app stores. They might be able to provide more information on how the Xiaomi appstore works.

Flipkart is India’s largest eCommerce store which competes against Amazon. It has recently announced it will shut down its website and go 100% mobile.

Yahoo’s latest moves into mobile and the value proposition when pitching to Yahoo. What’s the UVP for Yahoo, Vendor and end customer?

9. People to meet in Silicon Valley

Both David’s are either in US or heading to US. Discussing who we can introduce in our networks.

If you are interested in joining us for the next google hangout conversation or have a burning mobile question you’d like to ask contact me here. We’re still figuring out the format and attendees so bear with us as we get the Australian Mobile Learning Machine rolling!

One thought on “Launch of the Australian Mobile Learning Machine”