Unless you have been living under a rock, you would have heard about this device called the iPad. The tech blogs I frequent are going crazy over the iPad, the reviews, the apps, the problems with the wifi etc….

Techcrunch posted a video of the first guy in line for the iPad at the NYC Apple store. I wasn’t sure if he was a fake due to some of the comments from the readers, even though there was another video of him being first in line for the iPhone.

My friend Betty who was in NYC recently, took this exclusive photo for me.

Clearly its no fake! 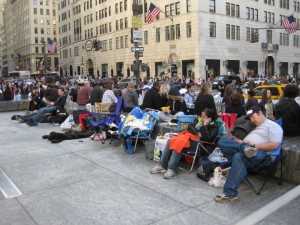 Guy sleeping in the chair on far right

I’m out like being first in line for the iPad,