Last week Facebook announced Marketplaces. It enables users to buy and sell within Facebook. Its more like list items and make offers on items. Facebook has had Buy & Sell groups previously. I’m a member of several Buy & Sell groups, but not really an active member. I do use Facebook groups a lot as I’m a moderator of the Sydney Startups Facebook group.

Facebook Marketplaces is going head to head with Craigslist, Gumtree and eBay. It claims that it has 450mil MAU (monthly active users) for buy & sell groups. That’s huge. I’m curious how they calculate that. Given that I’m a member of several groups, I might view an update in my feed. But it doesn’t mean that I’ve engaged with it.

Facebook has redesigned their core mobile app so you now post, bid and manage items inside the app. Facebook marketplace is only available in US, UK, Australia and NZ.  They are bringing it to mobile first, then to web. So I’ve been exploring it in more detail this past week on mobile. Cause I’m curious like that 🙂

I discovered that you need to have a “buy & sell group” to enable listing of items. The group that I manage is not a buy & sell group, so you can’t list items. Perhaps that will be available in the future.

But you don’t have to part of a group to post an item. You can choose to also cross post it in a Buy & Sell group.

In the mobile app, you can see items posted nearby. You can select the radius e.g. 40km radius from Hurstville.

Items can also get posted in the activity feed of the group. If you are in that group, you get notified when someone posts something in the group. So there’s a potential for high engagement.

Facebook is a gigantic mousetrap for daily engagement. It has ~60% DAU/MAU ratio. For many people, Facebook IS THE INTERNET. They can roll a lot of 1.6 billion MAU into Marketplaces. They also have 1.4 billion MAU in their Facebook mobile app alone.

The challenge for Facebook is that this one app now does so many things. Its a social network plus its a marketplace. Lets not forget, you can also manage your events, groups, and post your cat videos on it!

Right now, its a bundled experience. Its a bit clunky to use the Marketplace. Facebook has unbundled Messenger to be a separate app and built that into a powerhouse platform. 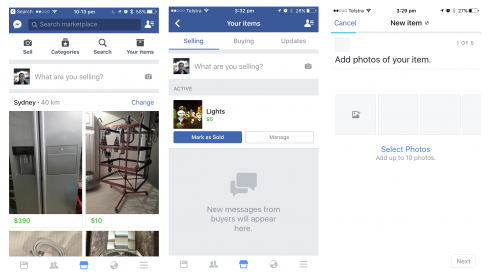 There’s two avenues it can pursue
1. WeChat-ification:  where everything is a bundled experience, into one hub. Massive app.
2. Separate apps: where core experiences become unbundled. Simpler user experience. Value prop is easier to understand. Smaller app.

If I was the product manager on it and I saw that Marketplace has traction, I’d consider unbundling it. You could build a far better experience for a marketplace with a separate app. The whole app would be geared around marketplaces & eCommerce. But you wouldn’t be able to funnel as many people into it if its a separate app. So I understand why they make it as part of the core experience for now.

Disclosure – I use to work at Airbnb and its a fantastic service! I’m also a shareholder in Facebook.

They should add Facebook reviews for sellers and buyers like eBay. Building reputation and trust is important for marketplaces. Do they have the item listed? Is it in good condition? If I turn up, will the person be there? Reviews can go a long way to greasing the wheels of eCommerce.

One of the aces up its sleeve, is Messenger. The key to marketplaces is liquidity. How fast a listed item can receive bids and turnover. It has to be as liquid as an eCommerce store or equivalent experience, otherwise you wouldn’t list it on there.

Messenger is a critical piece because its a mobile app and tied into the core Facebook experience. Its about the speed of the response. You can get push notifications as well as get notified in the app. Its much slower when its email. As part of the chat application Messenger, it will increase response rates and hence increase overall liquidity.

Ideally, Sellers that respond faster could be rewarded and have a higher ranking. Facebook pages already list response times. In addition, Airbnb shows response times and percentages of hosts. I can see that happening with sellers as well.
Here’s a teardown of some of the screenshots from desktop/mobile.

When you list items on the web it looks like an eCommerce listing page. Its a view that’s a very common structure on eCommerce websites. It has a carousel of images, price, product description, related items. Having worked on eCommerce websites for many years (shoutout Magento!), its a look that I’m very familiar with. 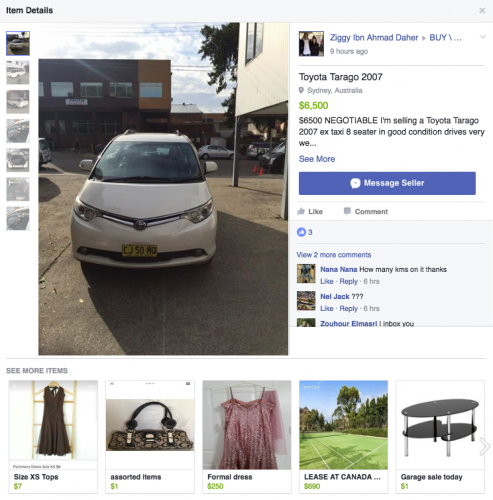 I took screenshots from the iPhone app.

The first thing I noticed was that the Messenger app icon moved to the top left. Marketplace is in the centre of the bottom tab navigation. Its the icon that looks like a shop. 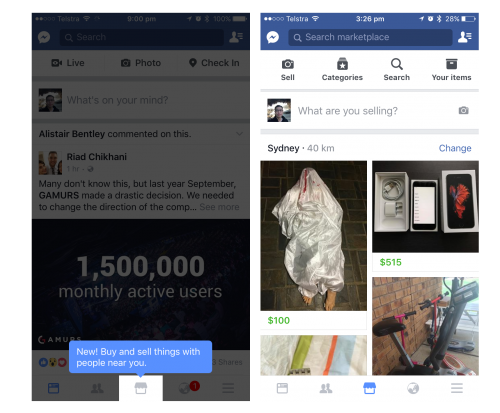 They’ve adopted a Pinterest style feed. It looks kind of weird. I suspect the images don’t look as curated or nice as Pinterest. They’re not “collections”. They are all types of random quality photos taken from your phone. Pinterest looks way better. They have better spacing because they aren’t restricted to only like 3/4 of the screen. Their cards also look nicer with the rounded corners. 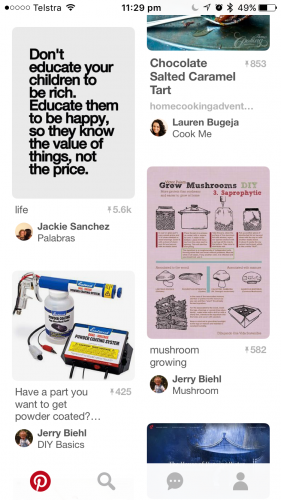 I was in the market for a pokeball. So you have two options. You make an offer or contact the Pokemaster. Its very easy to make an offer. Though I wasn’t sure if I was buying it or saying I was interested.

I was surprised that you couldn’t transact. I’m sure its coming though. The idea seems to be that you list it, then they’ll come pick it up off you. $5 seems reasonable for a poke ball, right? 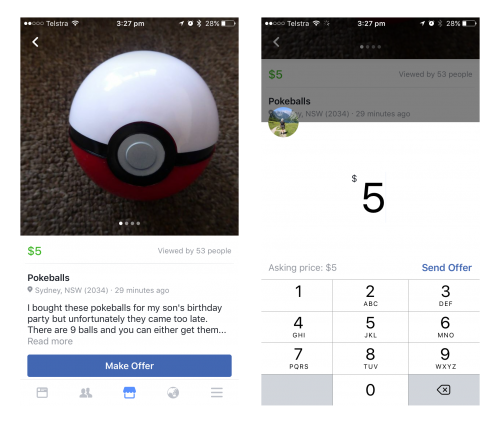 You can see other items the seller has on the marketplace. Its a similar experience to eBay. Being part of Messenger means that you get notified quicker because its on mobile, you can get a push notification and its in an app that’s part of people’s daily lives. 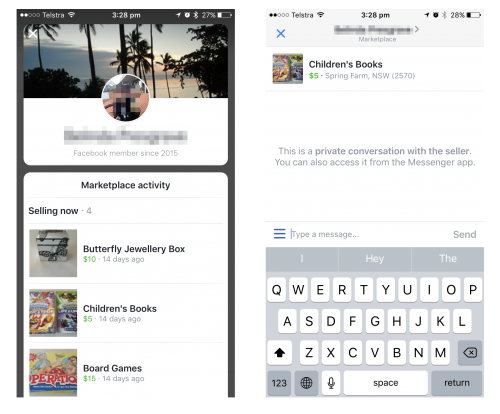 The first thing I noticed is that it has these massive buttons at the top for sell, categories, search, your items. Its very busy because they also have Messenger, search, and see your friends online above that. It does kind of mirror the Facebook home screen experience as it also has quick actions for live video, camera and check-in. 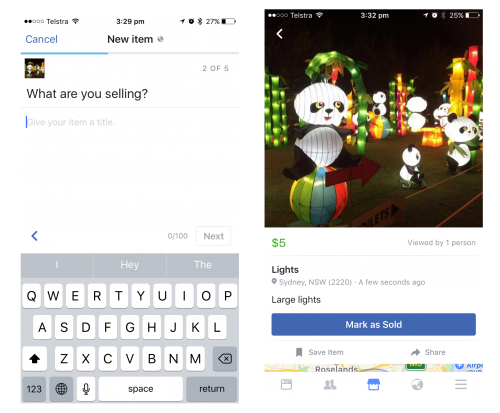 You’re clearly now in marketplaces. So when you press search, you are only searching the marketplaces. Its a filtered search. But I don’t understand why they have search twice. 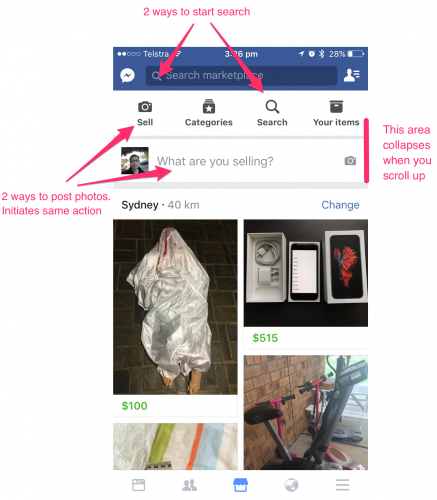 You also now have this double type of navigation. You have bottom tab which is used for screens. Typically bottom tab is used for quick nav for primary views. Then you have a secondary level navigation at the top for the screen. Generally, having a top and bottom nav can be confusing. It works ok in this context. They have to put it at the top because they already have the bottom navigation. They are also trying to fit in another product inside of a bigger product.

It has two buttons for selling, the icon “sell” and then the status update for “what are you selling”. Again, this is a double up as well.

So am I posting a status update or listing an item? Its kind of tough because its a marketplace app inside a social network. The current experience is kinda weird. I go to Facebook because I want to keep up to date with my friends. Not to find a used book or a used car. My gut tells me that its better as an unbundled experience. But I personally wouldn’t use it as much. Hence, I get why they have tied it to Facebook app…for now.

It looks like they have optimised the experience for selling. Overall, the creation experience flow was fairly simple and easy to understand.

You can browse by category. Then add additional filters such as price and location. If you’ve used the Gum Tree mobile app, its very similar. I quite like the filters and its fairly easy to use. 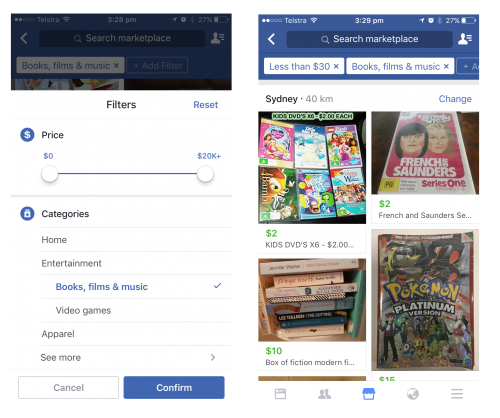 Facebook has had several goes at marketplaces / buy & sell. It’s always felt weird. They are definently making a bigger tilt now at getting into this space.

They have several important factors to consider:

1. Facebook Messenger: When you use Marketplaces with Messenger its awesome! Its really fast to respond to a seller with real time, instant chat.

2. Social trust:  Am I dealing with a real person? Can I meet this person offline? Facebook adds a layer of trust as you can see parts of their profile. Its currently missing social reviews and transaction history. Perhaps their strategy is to be more like Craigslist/Gumtree then eBay. When you handle payments & allow transactions, it becomes a lot more complex. When they can add social connections, it will add a further layer of trust that’s unique. e.g. am I buying from a mutual friend?

3. Is Facebook too thinly spread? They are trying to cram a marketplace into a social network. They are also fighting on many fronts – Messenger, Social Networks, Virtual Reality, Workplaces, Meetups, Video, etc…

4. Tapping into existing behaviours of buy & sell groups that already exist in the platform: 450m MAU isn’t anything to sneeze at. They have the ability to push traffic and eyeballs into Marketplaces. Smart to bundle and then potentially unbundle in the future when it gains more traction.

That’s my 2c on Facebook Marketplaces! I’m going to keep using it and will update you with my thoughts. I put a bid earlier on some items. So will keep you posted on how it goes 🙂

Have you tried Facebook Marketplaces? Let me know what you think!