“You can find me in the eatclub, with enough food to fill a tub” –  inspired by 50cent

I was speaking to my colleagues and other people at big tech co’s (total sample of size of 8) and the consensus was that like me, they don’t cook much either. If at all. For myself, I can get breakfast and lunch at work. In addition, if there’s left over food from lunch, I can get a free dinner too.

We have this system called Eatclub where you pre-order your lunch for the week. So I get my own meal from a daily selection. Its like a corporate Grubhub/Deliveroo / Delivery Hero. Your employer pays for it. Its usually 80% the same stuff with some new varieties each week. Its not bad. I’d give most of them a 7/10. In fact, i’ve rated a bunch of them 3 or 4 out of 5. These are some of my meal adventures that I had this week: 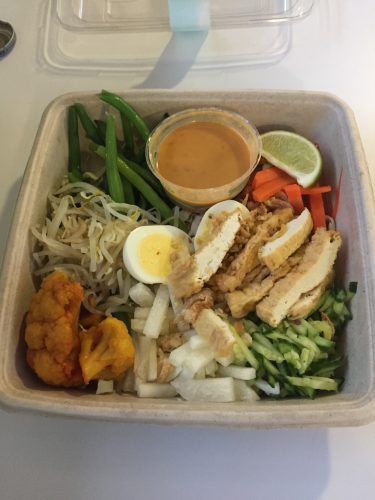 * Santa Fe mix: I ate the chicken salad first. This was spicy. Then I unwrapped what I thought was the burrito. I realized it was the tacos. I was supposed to put the chicken, lettuce, sour cream, bean sauce on it! This is what happens when you try new stuff! 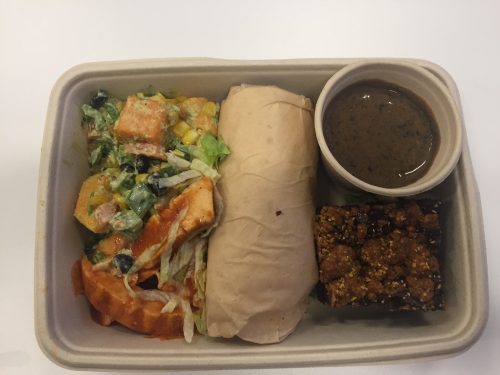 I do have some go-to dishes like salads, eggplant tofu, thai curries, indian curries. I stay away from sandwiches. Carbs yo.

The meals are typically too big. So I’ll eat half of it and store the other half in the fridge. Then take the meal home to eat for dinner. Its impossible to finish the whole thing, particularly if its a salad. If someone doesn’t eat their lunch, you can also grab it from the fridge to eat for dinner. I usually heat it up in the microwave and have it at home.

For breakfast, since my commute is 1.5 hours each way, I go to work as soon as possible. I either make a quick breakfast of oats microwaved or make something at work. Typically its a bagel with cream cheese or muesli. We have some awesome tasting muesli at work which a committee chose. I also learned that you are supposed to grill the bagel – that’s the American way!

I believe there’s a direct correlation between tech companies that offer free food and cooking skills in the Bay Area. I’ve probably cooked twice in the past week. I usually do a cook up where I make a large batch of food that will last for 3 meals. Typically 3 dinners. The only time I have to cook is on the weekend or one night during the week. I love being able to do some cooking and the satisfaction of making something you ate, whilst watching American sports or Netflix series. The last two meals I made were: 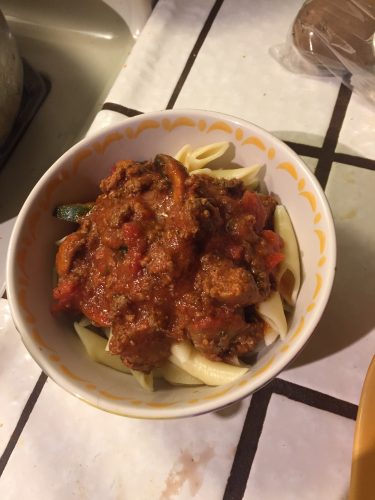 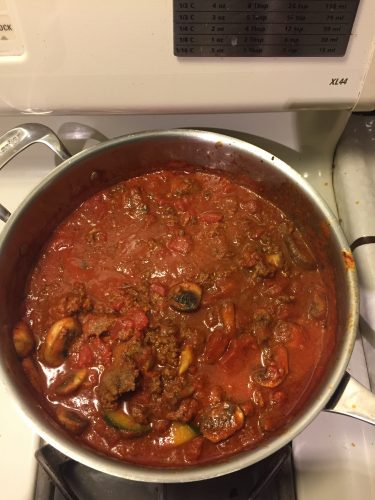 I’m going to have more time when I move to Mountain View. I’ll be able to get home at 6pm or 530pm instead of 7pm now. That extra 1 – 1.5 hours per day will allow me to make my own meals. I also want to cook more and up my cooking skills. I feel that being able to cook is an essential life skill. I love learning about new techniques and flavours I can make. Admittedly, I’m no masterchef / top chef. I can only make basic dishes but look for more photos and videos on my food blog Where’s My Sauce (via the Facebook page). Its also a great skill for a guy to have (single ladies where are you? haha)

On the breakfast side, I usually make oats as its quick and easy. Or i’ll eat a piece of fruit like a banana before I go to work. I have more time to make a quick breakfast like a quiche, scrambled eggs, pancakes, or something else. I’ve also been getting some great tips from my friend Anna Lee this week on how to make thai curries from scratch and store them in the freezer and bulgogi.

Overall, I would say that my experience is atypical. Majority of people get the free lunch. There are some colleagues that bring in their lunch from home, typically its last night’s dinner. I might do the same. I want to do that, but I can’t be bothered bringing it all the way from San Francisco. If I live closer to work, I’d be able to transport it easier or if you drive. I did see that we get a nominal charge for food which is $1. Its some kind of fringe benefit tax. I did hear from an accounting friend that this is the correct way to do it.

Further, I eat out. Typically if a friend is in town or wants to catchup for brunch or dinner, we’ll go to a restaurant. Sometimes I can’t be bothered cooking and will order take out. In America they use this term to replace “take away”. The term “to go” is also used when ordering it. Sometimes I’ll also buy breakfast on the way to work. I’ll get a bagel or croissant and a coffee. However, this will cost $7. I’d save this if I ate at work too.

Here’s a graph of my typical week of free food and cost savings. There’s also a line showing my weight (kidding) 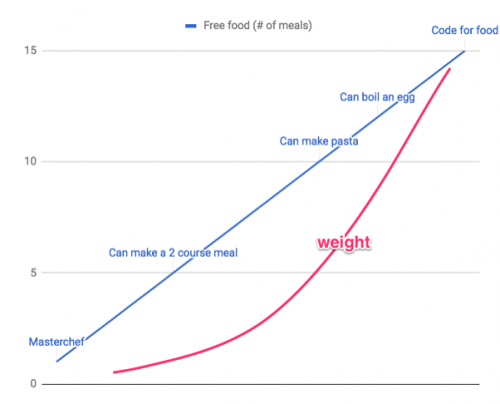 So in short, I’m definitely seeing trends of decreasing need to cook, hence a decline in cooking skills to the proportion of free food being eaten. The way I look at it, it reminds me of an eco-tour I took when I went to Thailand. The tour guide said not to feed the wild animals. If you do, then they get accustomed to feeding from tourists and you change nature. Feeding the animals, changes their feeding habits and ability to hunt. In a way, the same thing is happening when you feed large populations of people that depend on it on a daily basis for all their meals. They lose their ability and desire to cook.

I’m planning to do some cooking on a regular basis. A roast such as a lamb roast, Thai / indian curries, asian food like char kway teoh, laksa, fish, and some slow cooking. If you’re free, hit me up! I’ll post up my cooking schedules and you can be my test subjects. There’ll be disclaimers at the door. I’ve done some cook ups before with friends. I did a Malaysian cookup in the past called “Matt’s Hawker Stand” where we made Char Kway Teoh. My room mate and I also made an epic lamb roast with vegetables. It was ah-mazing. I’ve also come to like glazed ham. I helped my brother make it over christmas. So that’s on the menu too!

I’m out like cooking skills in the Bay Area,
Matt Ho

One thought on “Day 275: The relationship between cooking skills to free food (In da eatclub edition)”