It’s dawned on me that I’ll be moving from San Francisco soon. I’m write to you as I’m traveling on the Caltrain in the rain. Here’s a pic I took yesterday in SF. I had to go to the hospital at UCSF for a routine checkup on my heart. It’s from one of the top floors. Amazing view of city shrouded by fog. 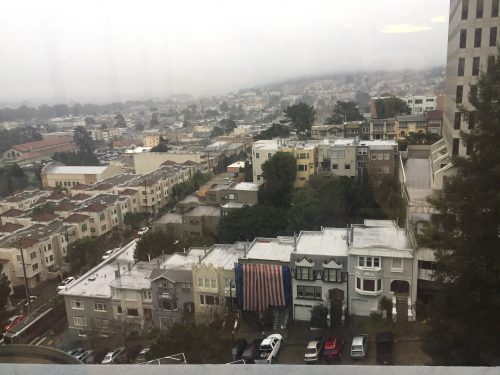 After my company moved to a new location, my commute is now 1.5 hours each way. In the morning during peak hour, I have to do the following:

– 5min wait for the shuttle

This is if everything lines up in the morning. When heading back from work, I arrived at the bus stop in our building complex car park and we saw it zoom past. If I miss the bus, the next one could be 20mins away. You need to time it when you leave as the shuttle and trains times are interconnected. However if you miss one of them, it has a chain reaction meaning you’ll miss the other one too. Ahh life living in the city and commuting to South Bay!

I’m not sure what the best way to say this, but the commute is a suckers game. I have friends and colleague that travel 1.5 hours to 2 hours each way. Sometimes on public transport, company shuttle or by car. It drains the life out of you. It sucks your energy and time from doing other things. But I get it. I ❤️ the city (SF). There’s lots of things going on, people to meet, a buzz about it. Amongst the homelessness, stench and overpriced housing. So I do empathize with anyone that does the long commute.

When I move you move
I’m contemplating when exactly I will move. I have some hard dates. I get the keys this Friday to my new place. Then my move out date is the following Saturday. The issue is that the place is unfurnished. So even if I was to move on Friday, I won’t have any furniture. My current place in SF was fully furnished. I don’t have a bed, dining table, couch, TV, bed sheets, pillows or even a bath towel to my name!

I have to start all over again. I’ve been researching into whether it’s better to buy furniture or rent. I do like the flexibility of being able to pick up everything and go easily. I don’t like the idea of owning furniture. But it is cheaper to buy stuff. My room mate recommended a startup called Feather which rents furniture really cheaply and targets millennials. It’s actually in YCombinator. I can rent everything I need for entire house for ~$150/month. When I worked out the economics, you’d break even in one year and your costs would double in year two.

The other option is to buy furniture from you guessed it….IKEA! I’ve done that before. You can also buy from Amazon too. I’ve been researching beds as well. In the U.S, they have these mattress in a box companies. Their is a plethora of them – Leesa, Casper, Tuft & Needle, Purple and more! There’s also a similar thing on Australia called Koala started by some friends of mine. I’ve been watching a lot of reviews about these mattresses. I know the dimensions as well as the different sizes. I’m all over the Queen, King, California King, TwinXL, Twin. In fact I even bought a measuring tape from Home Depot to check out the sizes!

Basically the mattress comes in a box. When you take it out, it starts expanding. It has foam inside so it can be compressed when packed.

So there’s going to need to be some timing co-ordination. I could either move this weekend which is also a long weekend. Then start fitting it out with stuff. I need forks, knives, plates, and the dreaded lights because bedrooms don’t have lights.

Or I could move in one go. It’s a bit tricky because the mattress in a box companies take 4-6 business days to deliver. I also don’t live nearby but I do work close by. In addition, I have potential room mates wanting to view the place. I need to clean everything in the the current place I’m living as I’m moving out. My minimal viable living space is I need a bed. If I have a bed, I’m good to go. I don’t need anything else yet. Though some forks and spoons would be good too! It’s likely that I will be living between two places for a week as I make the big move to the ‘View!

Eat all the things in Potrero Hill
In the final weeks and months in SF, I’ve had a bucket list of things I have wanted to do. Also people to meet up with. A few months back, I really wanted to go to Plow. It’s a brunch spot which has huge lines outside. I was fortunate that my buddy Jordan from BigCommerce was in town. He was a guest in Season 2 Episode 9 of my podcast this Mobile Life.

My buddy Anna from Zendesk arrived this weekend. She’s on Season 2 Episode 8 discussing user research. Last night we went to a restaurant I have been meaning to go to a while which is Chez Maman. It’s a French restaurant which always has huge lines outside. Yesterday was a Monday and it was raining moderately so it was less busy. I was fortunate to be able to walk in and get a table. The place is good! I had the Moules which are mussels with garlic broth. For the sides, I had the frites with aioli – French fries in a French restaurant! Anna had the chez maman burger. It’s a French bistro style burger. 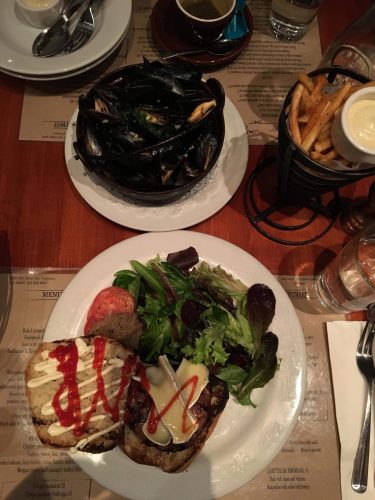 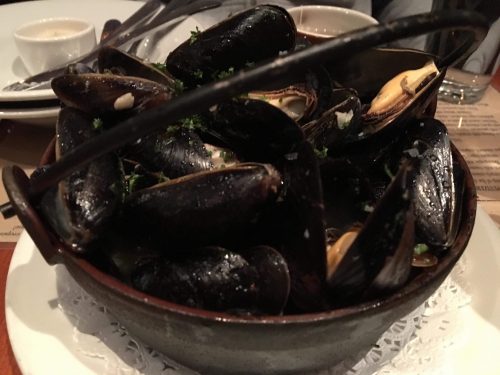 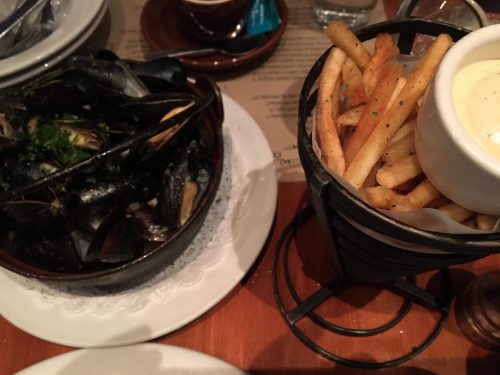 I’ve actually been before to Chez Maman, but to the one in Hayes Valley a few years ago. After that we walked around the neighborhood and I gave a local tour. I showed her the cafe I frequent, the various restaurants, bookshops and flower store. Then made our way to the Turkish restaurant Pera for dessert!

Pera is one of my favorite local spots. By the way, Americans like using the word “spot” to describe a place. Repeat with me here – “it’s the spot”.

When we walked in, the waiter asked me where I was from. I said Anna was from NZ and lives in Singapore and I was living nearby. He kept persisting and said “no, but where are you from?”. So I replied “Australia”. He said “where in Australia?”. So I said Sydney. Again, he said where in Sydney? Which I thought was weird and borderline asking too much. So I said “Bankstown” which is a larger surburb. He seemed to smile so I figure he knew where it was. So I then said “Padstow” to be more specific. He seemed to recognize that too.

It turns out that he used to live in Sydney for 15 years. He was a personal trainer living in the city. He met his wife in Sydney on one of his first nights out. It was really cool speaking to another Sydney sider!

He had a different accent to Australians so I asked where he was from. He replied Turkey. So we started talking about Turkish food and restaurants. As I had been to a Turkish restaurant on the weekend at Olympus in Mountain View. I showed him my breakfast and spoke about how it was a typical Turkish breakfast. 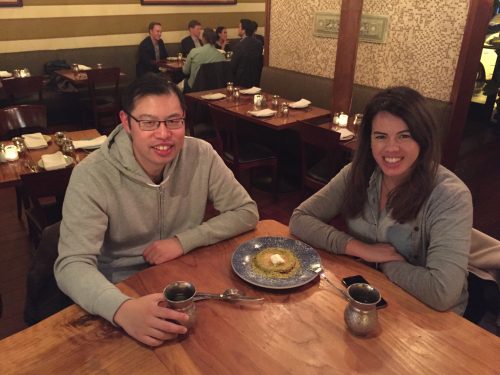 We ordered a kunefe which is a pastry dish with pistachio, honey and ricotta. It definitely hit the spot! Remember in America use the word “spot” liberally. After that we had some Turkish tea which we got on the house which was awesome! 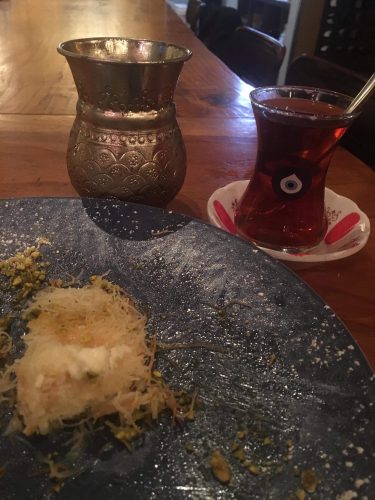 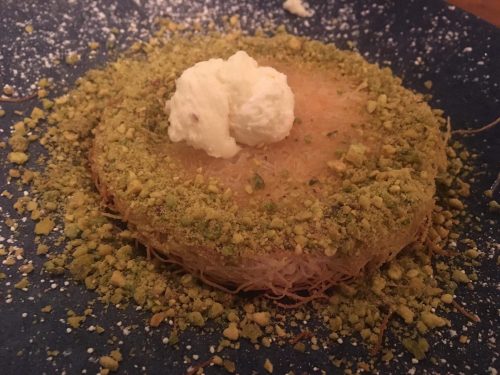