The Tech World has been buzzing lately with the introduction of several new search engines and innovations.

In the past few weeks, we’ve seen the following come out:

I’ve experimented with all of them, except for Wave since it’s not publicly available, though I have signed up for updates and preview =)

My intial impression is that Wolfram Alpha is very cool. It answers questions as opposed to finding results. You ask it for the distance between Sydney and Melbourne. It will find the distance, time by car/plane and a map showing the distance. Ask a question and it gives you one answer with some stats. I actually believe this is the way search engines will be headed. It’s a new way of thinking about search results.

Check out this video which has a good comparison of Wolfram Alpha v Google by ZDNet.

Bing is ok. Microsoft needed to upgrade their Live search, which I never used. I only used it when I searched in IE and I forgot the default setting wasn’t google.  Live search just did not look pretty. Google was minimalist. It simply worked and had a great UX (user experience). To be honest, I don’t see myself switching from Google to Bing or Yahoo. Google is too dominant in the world of search right now. In Australia, it has something like 70% market share. I might use Wolfram Alpha to experiment. It’s better for unknown answers and simple queries.

I watched the Developer Google IO preview. Its roughly 80 minutes long and I got through about half of it. Waaaay too long. It’s very ambitious and has the potential to change the game. The potential to change the way we communicate online from email/wiki’s/IM, etc…. I really dig the idea of concurrent editing, because half the time you are simply waiting for the other person to respond on IM. The danger is that it can become a stream of consciousness.

In terms of how I communicate and come up with ideas, I like to have the time to think and reflect and then type it up in a word document or a wiki / blog. If I’m doing concurrent live editing (where people can see my edits and thoughts in real time), I’m really put on the spot to come up with something. I know you can turn this feature off on Google Wave, but this is the danger of concurrent editing and the potential.

I really dig it though. The ability to combine rich media like photos, video, playback. The developer described is as how email would look like if it was developed now! It’s like a cool mashup of blogs, wiki, photo sharing, microblogging, IM, etc…

You can read an alternative take on it by Jeremiah Owyang.

On Wednesday, I had the opportunity to attend Wiki Wednesday at Google HQ. When I was RSVP’ing, I noticed that the format was short round robin talks of 5 – 15mins. One of the suggested topics was “How wiki’s integrate with Enterprise 2.0 tools such as Yammer and Blogs”. I thought to myself, if I am going to be there, I might as well do a short presentation on Yammer.

I had originally planned to talk about all 3 and how they work together. Given the time restriction, Peter (@HubertusB) suggested that it would be best to focus on one topic. So I decided to focus on Yammer, the concept of microblogging and presented a short case study on how Next Digital was piloting its use.

Check out my presentation below:

I enjoyed all the presentations and I particulary liked the interactive exercise we did for “sharepoint v wiki”, and the insights we gained from that. I had fun presenting and I hope it was of interest to everyone on the night. The presentation has been uploaded onto slideshare for others to view it. As I actually have to do another training presentation on Friday to show everyone how to use Yammer, it was killing two birds with one stone =)

I also got to check out Google HQ, and it looks like a pretty cool place. Also, thanks to Jamie, Vincent, Walter and Aaron for coming as well and providing some moral support!

Here are some various twitter feedback and comments on the night. 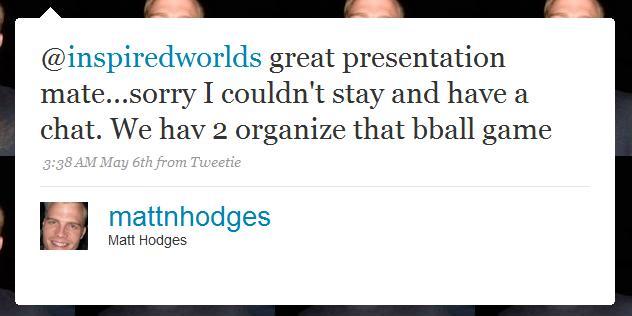 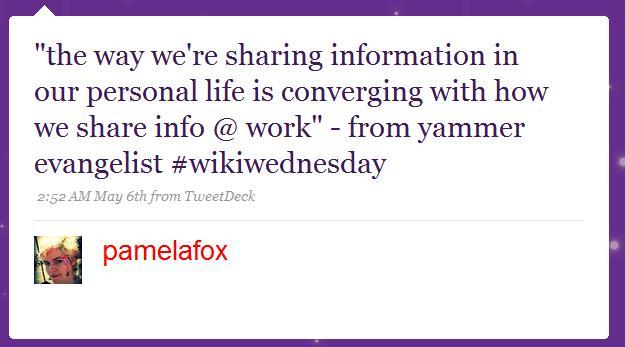 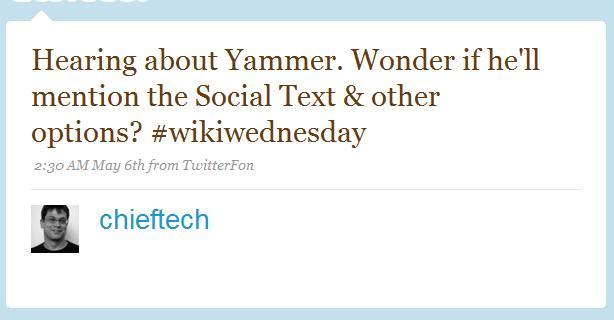