I recently had an issue with my Macbook Air. I wasn’t able to hear the sound clearly when I was using my headphones. Sound would come out of one of the earbuds but not the other. I couldn’t quite figure out how to fix it, so I decided to take it to the experts – the Apple Store.

The most convenient store was the Apple store in Broadway Shopping Centre in Sydney CBD. I knew from past visits that the Apple store is located on the top level. Usually I hate driving to the city. Driving in Sydney CBD can be chaotic and stressful. The drivers have short tempers and there’s a lot of one way signs. So I had that stress in the back of my mind as I drove to the Apple Store.

As I approached the carpark, I noticed there were two lines – a red line and a yellow line. 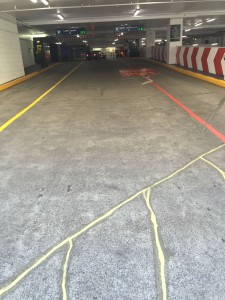 The cars ahead started naturally separating themselves into the lanes. 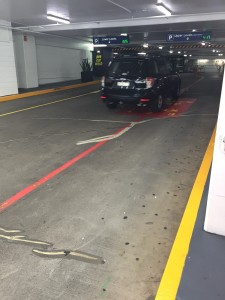 As I got closer, I noticed this sign which you might have seen in the distance in the above pics. It clearly said “Follow Red Line to Apple Store And Target Best Parking”. It was instantly clear to me which lane I should choose to get to the Apple Store. 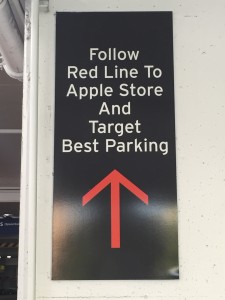 I simply followed the red line all the way to the top. It was really easy and I parked near the entrance of the shopping centre.

I then went in to the Apple Store and it took a few mins to get served. Then they took my details down and said they think the problem is to do with the sound card that connects to the audio jack. The helpful staff said it would take up to 5 days. They issued me with a receipt and it had no charge on it.

I took it in on a Saturday morning. I got an email back on Sunday afternoon saying it was finished. Then I picked it up on Monday. I was initially concerned about handing my work laptop in and how long it might take. But it had no interruption to my work.

It was just an awesome end to end user experience. From when I entered the car park to going into the Apple Store to getting my laptop back. Someone had deliberately thought about traffic flow to the Apple Store (and to Target). They know that these stores are a popular destination for shoppers.

They didn’t want to take them to the bottom level, have them park and then have the customer walk up 4 levels. Take them directly the the Apple Store. Do not pass go. When you have primary actions that a user wants to take, make it easy and fast for them to access whether its an app or a car park.

If you have features that majority of people use or need to quickly access, you can:
1. Make these buttons really big
2. Dedicated links to access on a website
3. Favourites on the home screen.

Or it could just be a red line to take them there.

There’s a reason why the camera is so easy to access on an iPhone. Its located at the bottom of the screen near your thumb. You can even access the camera when your screen is locked and you NEED to take that quick photo. Also think about when you want to change your phone to “airplane mode”. Its the first item in settings. Why? Because its something you need to access quickly when you are on a plane.

This car parking experience also made me think about on-boarding experience. Literally how they took me on a specific path and ramp to show me how to use the car park. On-boarding is critical because its going to be the first interaction that a user has and can define their experience.

I considered exit experience because it was fantastic. When I left the car park, there was a sign saying “follow the yellow line”. There are many times where I have left a car park and have been confused with the exit signs. You can end up driving around in a circle!

Lets contrast this with a bad car park user experience I had. I wanted to go to IKEA in Rhodes Shopping centre. When I got to the entrance, you had to take turn to get in there. There was a sign for IKEA but it was a combination of a sharp turn and showing me the sign too late. I had already committed to the lane I was in.

There wasn’t the option to change into another lane. It instantly became one lane which was essentially a tunnel. The tunnel was quite dark and poorly lit. In fact there was no lighting. I noticed that all the cars were blindly following each other with their lights turned on. We had no idea where we were going. After I parked, I noticed that one of the parked cars had left their lights turned on, no doubt because the entrance was poorly lit.

I looked around for a sign that indicated where IKEA was. I figured there would be a dedicated entrance or a sign considering how big IKEA is. Then I found this sign that said “Shops”. The arrow was pointing to that door. So I went to open the door. 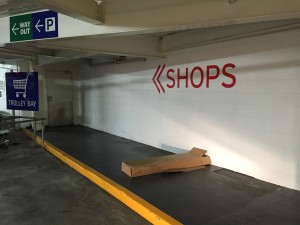 But it was locked! So I thought why do you have a “Shops” sign pointing to this door?

I then walked inside and couldn’t see any signage indicating where IKEA was located. I was lost. I ended up asking a shop keeper who had a stall. The instructions from the shop keeper were “Down there, upstairs on level 2” whilst pointing ahead. After I took the escalator upstairs, I found this massive entrance for IKEA. 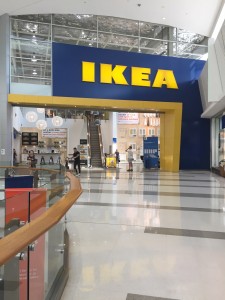 If you have ever been to an IKEA store, you know that its an absolutely huge store with stacks of furniture on display. It was also packed full of people on a Saturday afternoon.

Whilst there are other stores in Rhodes, I would assume that the majority of traffic is to IKEA. Even if its not a majority, its still a popular destination and a big segment of shoppers would go there. Its a place where you would expect that someone would make the trip just to go there and spend several hours inside. They would also want to park as close as possible if they have to move furniture.

So make it easy for them to find and park there. If you know a big chunk of your customers are going to take this action, then you can have a dedicated way for them to get there. With the smaller stores like a fruit juice shop, its probably a secondary function for a customer to visit Rhodes. So that doesn’t need to be as prominent as IKEA which is a primary function.

I later on looked back at the signs outside the entrance for IKEA and noticed that they didn’t tell you it was upstairs either. Or maybe it did it in some cryptic way which I couldn’t work out. Maybe it was enter then use the lift? But it wasn’t clear to me. It looked it was saying you can access other shops via the lifts. 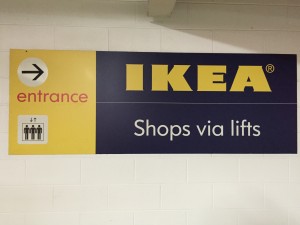 As I was leaving the shopping centre, I noticed that you could leave a rating on a tablet device. It asked “How would you rate your overrall shopping centre experience today?”. Needless to say I chose the unhappy face*. 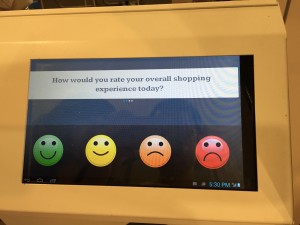 I believe there’s a lot we can learn from our everyday lives which we can apply to the digital world.

1. Consider the end to end customer experience. From on-boarding experience to the customer service to the exit experience.
2. There are actions that people take more often or need quick access to. These are primary functions so make them prominent and easy to get to.
3. Have a red line to the Apple Store and IKEA 🙂