A few weeks ago, I was heading to Strathfield to eat Korean food. Strathfield is a Korea town in Sydney with a lots of Korean restaurants. Specifically I was craving KFC, also known as Korean Fried Chicken.

It was getting late, about 9pm on a Friday evening. It was impossible to find parking on the surrounding streets. After driving around for a while, I parked at Strathfield Plaza shopping centre. On the main strip, there’s a couple of Korean restaurants that do this dish so I knew where I was going to head.

In the back of my mind, I knew it was late in the evening. Based on my prior experience, I knew it would take some time for the food to arrive and I dreaded the wait. As we walked through the shopping centre, I walked past this restaurant. Something about it caught my eye. 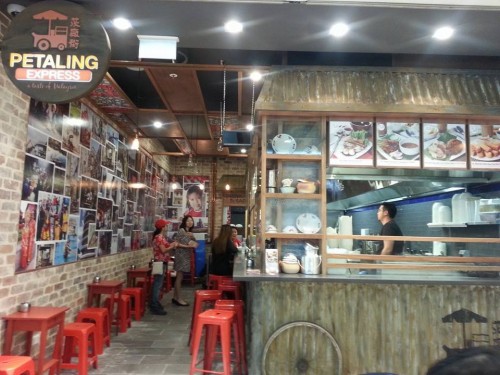 Firstly, it was called Petaling Express. So that implied that the food came out fast. Which I needed! I would definitely prefer a shorter wait time given the time in the evening.

Second, I immediately associated it with Malaysia and I love Malaysian food. I had seen Petaling Street restaurants in the city so I knew the brand. I had also been to Petaling Street which is a Chinatown in Kuala Lumpur, Malaysia.

Third, I noticed that they only had a few items on the menu. They had big bold pictures. I figured if they only did a few things, they had to do them pretty well.

After lingering for a few mins and perusing the menu, I decided to order. Immediately, I noticed the menu was limited. It had:

It was what attracted me to the store. The simplicity of it all. Even with such a limited selection on the menu, I still went into a food order stress trying to figure out what to order.

I finished my order and I put my change into the tip jar. As the coins clunked into the jar, I heard a voice behind me say “thank you”. I turned around. I noticed it was a young man who was sitting down and wearing the black staff uniform. I assumed he was a waiter and he was taking a break.

As I was waiting for my food to arrive, I started talking to him. It turns out that he was the owner. He explained that this was a new concept store called Petaling Express. They had sold off the other Petaling Street restaurants.

With this new concept, he really wanted to focus on a few dishes. This meant that they could deliver higher quality food. They could have higher quality ingredients since they made less dishes. You can also make them faster as you can focus on fewer dishes.

The food arrived and I can tell you it was really good! There was roti canai with chicken, chee cheong fun, and bat kuh teh. The two drinks are teh tarik and longan.

This meal for 2 people cost $27. We were really full afterwards. Check out the stellar reviews on Yelp. Its now my favourite Malaysian Restaurant. If you like Malaysian food check out “my best Malaysian restaurants in Sydney” list on Townske.

I always wonder when I look at an extensive menu in a restaurant. I wonder whether this place actually does anything well. In the city, there’s another Malaysian restaurant called Pappa Rich. They have the most extensive menu I’ve ever seen. There’s like 20 versions of the same drink. There’s 5 versions of the same food with slight variations. It makes it really confusing as a customer to order. Its actually a stressful experience trying to figure out what to order. You spend ages flipping through the menu, mentally bookmaking dishes and using your fingers to keep the pages open. The taste of the food there is good but its not great.

This experience at Petaling Express really made me think about more than just food. It made me think about my business and how we’re doing lots of things. To be really successful at anything, you need to focus. You need to do one thing better than anyone else. Its far easier to stand out when you have a reputation for just one thing.

p.s. If you like food, check out my food blog wheresmysauce.

Edit: I have since gone back to the restaurant a second time to have a meal. The menu had more mains that I saw the first time. However, the menu is still limited and the lesson I’ve learnt remains the same. I’ve updated the number of menu items to reflect this.