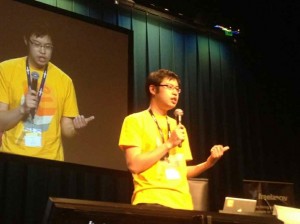 Per my last post on pitching, an entrepreneur needs to have a mentality of “always be pitching, always be raising, always be closing“. You never know when opportunity might strike and how long the process takes.

Yesterday, I attended the Sydstart conference which featured a lot of really good talks and pitches. I was fortunate enough to have our video featured as one of the pitch videos that would be shown inbetween other live pitches. I saw it more as an marketing/advertising opportunity so that the wider startup community could hear about Native Tongue.

My original intention was to shoot it myself using a home video camera. I then later tried to create a video using my iPhone camera and used iMovie to edit it. I’ve produced several Youtube videos this way for personal projects. You may recall my previous works such as my basketball diaries, UFC weigh-in days or my award winning web series Web 2.Ho.

However, I couldn’t get a high quality enough video that could be shown on a large projector screen and there was too much background noise from filming it outside. Having my dad hold the camera didn’t quite cut it either. Startups gotta save money right? 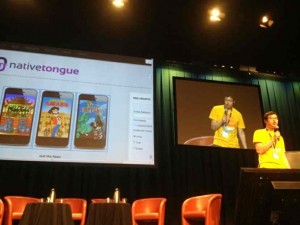 Desperately, at the last minute and on the weekend before it was due, I called in a favour from my good friend Jamie Andrei, a video production guru. He generously offered his time and worked tirelessly on the nights before to get it to me. You can check out his website and portfolio at
www.jamieandrei.com.au (no relation to Peter Andrei in case you are wondering).

I was very pleased with the quality of the video which we shot over a few takes. There was a lot of adjusting of the light angles, ensuring there were no shadows, and he briefly worked with me on my voice pitch and presentation style for the video.

However, we didn’t get a chance to show the video at the conference as the internet decided to go kaput. So here it is below:

As the video wasn’t working, I decided to go on the stage and do an impromptu pitch live in front of 1,000 people. I really wanted to do it. You don’t get an opportunity to do this all the time. I actually told Leslie from GetViable, who was sitting next to me, and had the video before my slot: “if you get the chance, you should go on stage”. Its far more engaging watching someone live and the crowd responds better than a video.

I had an idea what I was going to say as I’ve practiced my pitch many times for the video and also I’ve pitched before. I’ve always told myself, at the end of the day you are just telling your story and you know it better than anyone else. I started with the pain of learning a second language, and I knew a lot of the audience could relate to it. I’m sure I stumbled a few times, but the advantage I had was that I didn’t have time for nerves. I didn’t have words to forget. I just went out and did it. That’s the mentality you need to have.

I ended up being awarded 5th place out of 25 pitches (15 live pitches and 10 video pitches). I was pleasantly surprised given that I did mine impromptu. The number of people that came up to me afterwards saying they liked what we were doing and would download our app was well worth it. It was a nice reversal of fortune given that the video couldn’t play.

I wanted to leave you with some telling words from rapper Eminem:

Look, if you had one shot, one opportunity
To seize everything you ever wanted in one moment
Would you capture it or just let it slip?