I watched the fight at the Bankstown Sports Club with 400 people in the Theatre room. There were people standing in the aisles, sitting on the floor, standing up the back. There were so many people there.

The club also has a sports bar area with about a dozen screens, including two huge ones. I struggled to find a place to see a screen. All up, there must have been 1,000 people at the club watching the various screens. The place was pumping, there was even a line up the street of cars trying to get into the car park. It was just packed!

My knowledge about boxing

Here’s the context for my Mayweather vs Pacquiao fight review. I’m a casual boxing fan and I’ve seen about a dozen boxing fights. It’s the first time I’d seen both boxers fight other than highlights on Youtube. In terms of my knowledge about boxing, its been mostly gained from watching UFC. I’m a huge fan of Mixed Martial Arts. I’ve seen about 60% of all UFC fights to date and they’re up to UFC 186 now. I’ve also watched a lot of other MMA fights outside of UFC.

I’d say my knowledge about boxing is limited, but more than the average person because of my exposure to MMA. I still don’t completely understand the boxing scoring system or the UFC’s for that matter.

The fight went for the full 12 rounds. Mayweather was just too good and in my opinion clearly won. He was able to impose his will on Pacquiao. He was too elusive and evasive. I was also surprised how fast and accurate he was with his punches.

He’s really good at distance management and timing. This is something I really appreciated when I watched UFC and also did some jiu jitsu lessons. You have to be very good at judging the distance and timing your movement to be able to duck, get out of the way, block and counter. This picture tells the story of the fight. 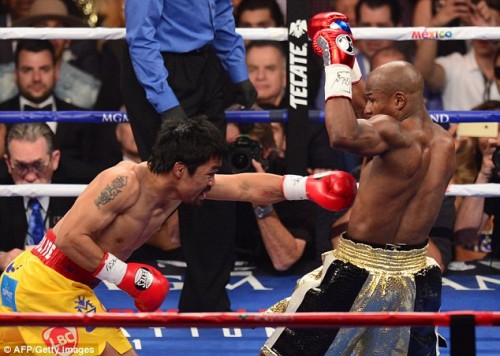 Mayweather has a defensive counter striking style. He’s also fast enough to get out of the way or he clinches to avoid strikes. Its annoying as a casual boxing fan because you want to see them engage in the pocket, trade the big punches and see a knockout.

So Mayweather was able to keep Pacquiao at a distance. With his speed and accuracy, he simply pot shotted Pacquiao at will. I read the stats and he actually threw 6 more strikes and hit Pacquiao more. This is the Compubox Mayweather vs Pacquiao fight review score stats below. 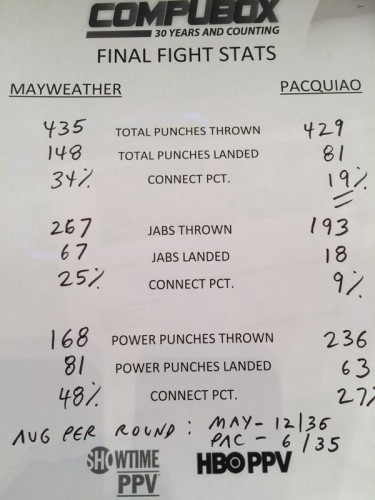 Another key stat is that Manny threw more power punches. But Floyd actually landed more. Manny threw lots of flurries. But they either rarely connected nor did any damage.

Mayweather also hits you when he feels like it with his counter striking style. Floyd had a 5 inch reach advantage and used it. When he moves forward and wants to hit you, he can. He’ll hit you once or twice, then he backs off. He wins on points and avoids taking any damage. He’ll just keep jabbing you to score points. He did that in some of the later rounds to get points such as in Round 11. Plus his timing and evasiveness means that he can’t be hit cleanly.

Manny was clearly the crowd favourite because of his fighting style and charisma. He kept coming at Mayweather. The fight went for the full 12 rounds.

As a casual boxing fan, I’d have to say that it wasn’t the most entertaining fight because of Mayweather’s style. But I can certainly appreciate his skills and ability. He was able to execute his game plan, avoid taking any damage and win on points.

Floyd now remains unbeaten and his record is now 48-0. Which is an amazing record.

Both Mayweather and Pacquiao will go down as the greatest fighters in my era. I’m glad to say that I saw the fight go down!

Yahoo Sports also did a Mayweather vs Pacquiao fight review. It discusses how and why Floyd Mayweather won.

I’m out like Floyd Mayweather’s running in the ring,