I have always been fascinated with all things tech. Through the years I have been naturally finding my way into the mobile industry. Or did it find me? It used to be that mobile assisted us with calls. Then we added some personal features like playing 2D monochrome games such as Snake, calendars, taking photos and storing our precious, precious Mp3 music files. It widened its reach when it connected to the internet and then came the rise of the app store as a distribution platform. The inevitability of mobile is in our face (literally). It is now a go-to staple for our practical daily needs.

Now we can’t imagine our lives without our mobile. Its ability to transact money, give directions, access essential services, provide crucial information for work, order transport or finding the nearest place to eat. Think of any aspect of the human life and most likely there’s an app for that!

It is such a personal device as we carry it on our pockets, bags and everywhere we go. Yet the lines start to blur when it comes to personal, social and work with these devices.

Lets take a look at a life event that happened a few weeks ago and how it was facilitated by mobile.

Weddings in a mobile world

I went to one of my best friend’s wedding recently which was an outdoor wedding. A wedding evokes ceremony, beauty, unity, sacredness, and celebration.

Not exactly the type of life event that seems very high tech.

Firstly, how did I get there? I had to drive from my house to Carss Park. Its about a 30minute trip. I didn’t want to get lost, so I used the Google Maps app on my mobile. I set the location in my phone, propped the phone in my dashboard, and off I went. The app guided me using turn by turn voice navigation. 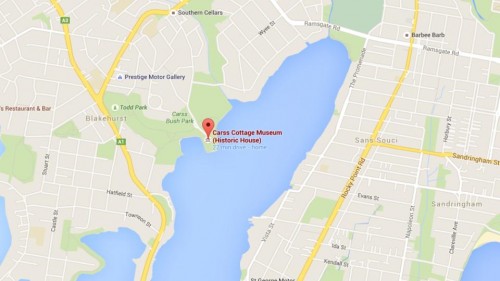 I arrived early as I was the DJ for the wedding. The wedding was in a beautiful location and it was an amazing day. I did what any self-respecting gentleman would do. I took a selfie. See that handsome face below. 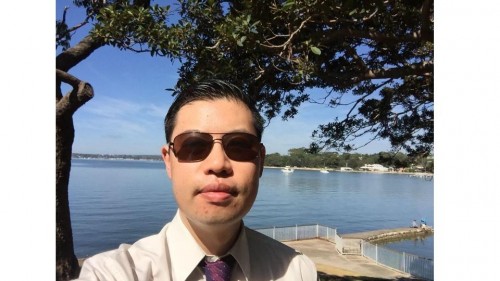 I had an important role as the DJ. The bride’s favourite song was the Beatles “All You Need Is Love”. The groom also had a playlist of songs he wanted to play. We hooked up his phone to a loudspeaker and played the music on the Spotify app. 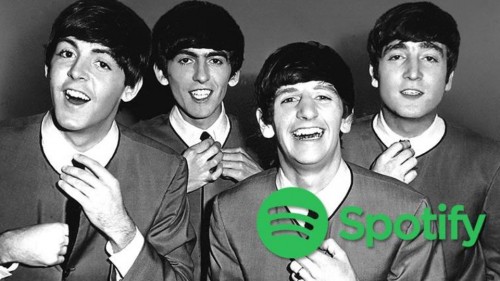 We also communicated throughout that entire weekend using SMS, WhatsApp and phone calls.

After the weekend, I reflected on how much a successful and fun day we all had. One of the reasons is that we were able to organise things using the convenience of our mobile phones. Offering practical ways for directions, personal interests (music and photos) and connecting people. Mobile has embraced and slowly invaded the different aspects of our lives. Its the inevitability of mobile.

How pervasive is mobile in our lives today?

When I started in the tech industry 8 years ago, I consulted with clients who wanted a web presence. Mobile came later as an accessory to their company’s online presence. Optimisation was focused mainly for big web. Websites, product displays, shopping carts, ads, all were optimised for desktop. Some jumped on the mobile train early enough. They recognised the opportunity of mobile but more as an afterthought so you can could access their website on mobile. It was very few and far between.

A few short years later, the tide has rapidly turned. We now live in a mobile world. People are using mobile more. It’s more convenient to carry than a desktop computer and has the key functions you need. Our phones now are just as good as our desktop computer 5 years ago. We are carrying around a super computer in our pockets & in handbags. Its the inevitability of mobile.

In the 2015 Internet Trends Report by Mary Meeker, mobile (phone and tablets) ownership had an exponential increase. While ownership of computers had been growing steady in comparison and has started to flatten. 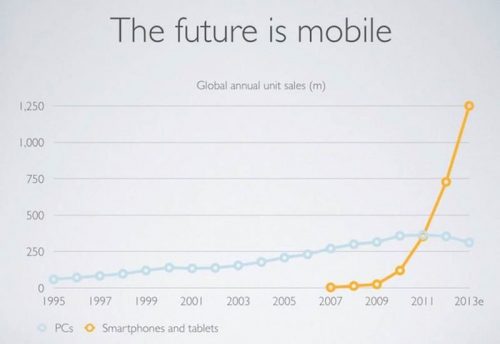 The graph below estimates up to 2013. I wouldn’t be surprised to see that mobile sales is now 8x – 10x PC sales. Its much more affordable than a desktop. Many people in BRIC (Brazil, Russia, India, China) are skipping the desktop and are going straight to mobile.

The number of smartphones dwarfs PC’s

So we know that sales of mobile devices is crushing PC’s. The total number of smart phones in existence also dwarfs PC’s. Its about 4x more smart phones than PC’s. 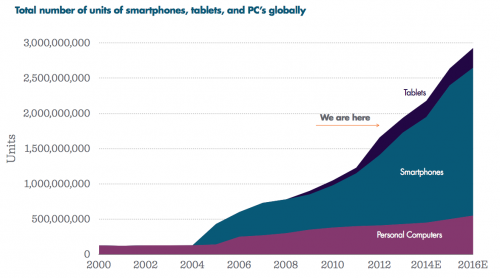 Mobile has 10x install base of desktop internet

Society has gone through computing cycles. We had mainframes in the 1960’s and roughly 20 years later we had the mini computer. It was 10x (10 times) the install base of mainframes. Then we had PC and desktop internet. Each were 10x bigger than the previous computing cycle.

Mobile internet will be 10x that of desktop internet. The rate of each computing cycle also appears to be getting shorter and having an increasingly bigger impact. First comes the infrastructure, then comes the apps & services. 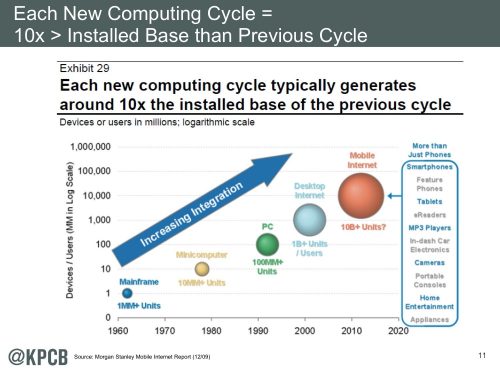 If you think about it, most electronic devices will probably be internet enabled in the future. As I type this, I’ve got my fitbit on which tracks my steps and heart rate. I’ve got a Kindle for my ebooks. I’ve got many devices around the house that connect to the internet including my Apple TV. I’m sure that more devices will be internet enabled from your fridge, microwave, toaster, oven, washing machine, shoes and so on. So if you ask me what the next computing revolution will be, its going to be “internet of things” if its not here already. Its just not evenly distributed.

The other ones are probably VR/AR and also drones. In essence you could argue they are a form of mobile internet. Its a device that has internet capability which links our interactions to the cloud. I don’t believe the device will matter as much in the future as its collects data. The device is the UI that links us to the cloud. Its all about accessing the cloud wherever you are.

Internet usage on mobile is greater than desktop

There is an increase in time spent on the mobile internet. the graph below shows time spent per adult user per day with digital media. Time for personal computer use remains steady through the years at roughly 2.4 hours a day. However, mobile is now used 2.8 hours a day. 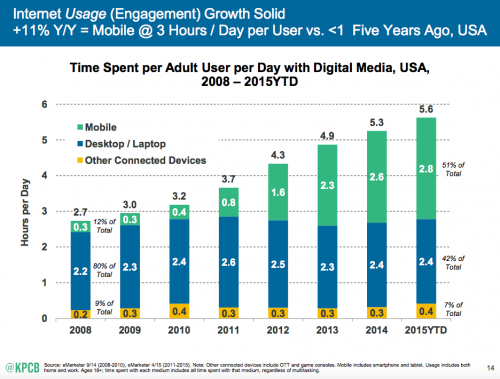 The green bar representing mobile usage is steadily increasing whilst the blue bar representing desktop/laptop usage is the same. The increase in time spent on mobile is not surprising, since we can use the phone on the commute, while in bed, even in the toilet!

Mobile only introduces a new audience 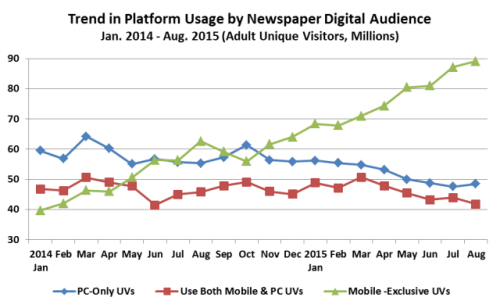 It shows the different segments that read the newspaper online. Many organisations are targeting a user on mobile & PC that may want to access the service from both devices. Understandably its a lot lower because you need to use desktop and mobile. The line that is rapidly trending upwards is mobile only. This is an audience that only uses their mobile to access the news.

Mobile has created a whole new audience segment that exhibits mobile exclusive behaviour. They won’t ever use your desktop product. They will use your product in a totally different way to desktop users. There are different features that will be more useful in a mobile only world.

Let’s look at Facebook, the largest online community in the world and most widely used application. Facebook’s monthly active users (MAU) was 1.59 billion for the full 2015 year. This figure must be primarily comprised of:

Facebook’s mobile MAU was 1.44 billion. This number has increased 21% year-over-year.

Mobile MAU is 1.44 billion out of a total MAU of 1.59 billion. This means that 91% of MAU is through mobile. These users have mobile & web or mobile only. This also correlates with their Daily Active Users (DAU) figures.

So 93% of total DAU is mobile. These users are mobile only or mobile & web users. 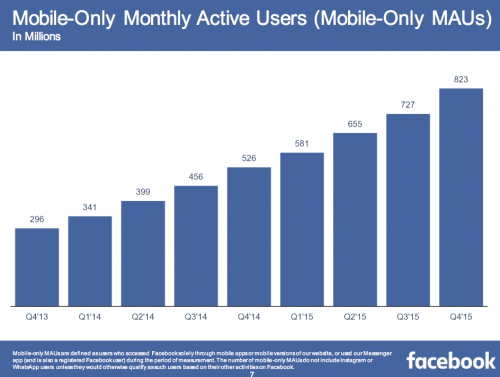 Facebook’s largest audience is mobile only

In addition, Facebook IPO’d in 2012 with a mobile app and no mobile advertising offering. By Q4 2015, 80% of Facebook’s revenue is mobile ads.

Its also due to the fact that if you have your phone on you and you want to connect with people, you now use Facebook. Its a way to serendipitously stay in touch. In addition, if you have time to kill and you have your phone, its so easy to open Facebook app and use it. Your phone book contacts were your network, now its Facebook. Facebook is your online identity. People interact and groom it every day to define their identity.

The phone has also rapidly improved its ability to take pictures. Pictures became the fundamental building block of many consumer social networks including Facebook. Its the basic atomic unit on which Facebook is built on. Hence why they acquired instagram to protect & encourage that behaviour.

The age of the mobile is here. Mobile is not a passing fad. Mobile is inevitable and is disrupting many industries. The convenience it offers points that this is the next natural step in the way of the world. In this computing cycle, mobile internet will have 10x the install base of desktop internet.

People use mobile everywhere and for everything. They reach for their phones first thing in the morning as they wake up and last thing before dropping off to sleep. Many people can’t even imagine their life without cellphones, and the connections and convenience it represents.

My questions to you are:

Its time to start thinking about it because its the new era. Its the inevitability of mobile.