Building an app is half the battle. The other missing piece of the puzzle is distribution and marketing.

So we decided to organise a mobile marketing meetup with some startups in this space to discuss these issues. It was inspired by this discussion on From Little Things. We decided the first meetup would cover the topic of “How to get PR for mobile apps”. You can check out our event here on eventbrite.

For our first meetup, we had a pretty good turnout with 15 people. The crowd was mainly comprised of app developers, product managers for apps, app marketers, and people with web apps looking to go mobile. It was scheduled to go for 1 hour, but it ended up being 2.5 hours. People just wanted to talk about mobile!

There was actually a lot of self-taught marketing experience in the room – people with some of the top apps in the Australian charts. So I’ve written a summary of some of the key learnings from the meetup. Its mostly about PR, and then we started covering other topics organically.

1. A targeted approach to each journalist

How you approach a journalist is important. Alison from ChillWithMe said that sending targeted emails with specific information for each journalist was critical. Networking with people at the SXSW conference before they launched and letting them be the first to know about it. That’s how they were able to get into PandoDaily.

2. Develop a knowledge base of relevant industry articles

Daniel from Parking Made Easy kept a spreadsheet of articles about his industry with notes on each article. He did this prior to launching his website. When he was ready to launch, he then personalised the email using the notes about the articles. 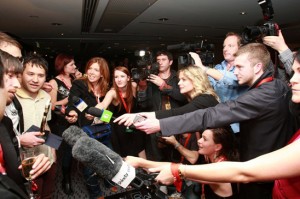 When everyone wants to talk to you

Chris from Buuna shared that contacting smaller regional papers was a great way to get writeups. They have more time available and may be easier to get in touch with them. Dain Hedgepeth also mentioned that local newspapers are interested in the “local boy done proud” angle as well.

4. A journalist will write about a group of apps

It is unlikely that a journalist in a major publication will write an article that will only cover your app. I have previously spoken to Will Glasgow from BRW who suggested that journalists prefer to group similar types of apps together and write about segments. So its critical to understand what industry that reporter covers and if they have reviewed similar apps in the past. You can also reach out to them and introduce yourself if you have a similar app.

This recent article about taxi industry is an example – its about the industry and not one particular app. Personally, I have found positive responses from journalists if they write about our industry (language learning) and I’ll introduce our app to them as a follow on to that article and suggest that I can provide an industry point of view or about mobile apps.

5. Have a press kit available

This was something that I shared. We’ve had over 50 articles written about Native Tongue, and we make it easy for the journalists to find all the assets that they need from our press kit. Michael Fox from 22Michaels blogged that they missed a PR opportunity with MX when they didn’t have images of their products available. Check out the press kit for Shoes Of Prey – I used this for inspiration.

Ben Hamey of Bonobo Labs previously suggested you should have the following available in your media pack: app screenshots, app icon, pictures of people using the app in an everyday setting, FAQ, and press release. You also don’t have to panic to get these assets to them in time and miss potential opportunities. The media kit for Zilla App by Bonobo Labs is pretty impressive.

6. PR for your target audience

I’ve started becoming a big believer of “blog to your audience”, a concept I picked up from Mark Suster. I think the same applies for “getting PR to your audience”. Many people in the room agreed that most PR had a limited effect on downloads. There might be a spike but it wasn’t sustaining and started to taper off as the article became less recent. Sometimes that much hyped spike never came. In the group’s experience, those users that signed up from major news articles also weren’t as sticky (i.e. they didn’t keep coming back). I believe its because they weren’t the target audience for the product.

One of the biggest download days for our app Mandarin Madness came from an education article written in the South China Morning Post, Hong Kong’s largest English print newspaper. It appeared in the education section and was written by an author that covers education and technology. This result made sense given that parents living in Hong Kong would read it, download it and love our app. It was our target audience.

Yose from Jormy Games had a simple, yet fun iphone app which involves replicating the reaction of shaking a softdrink bottle and having it fizz up and burst. It was one of the early apps on iPhone and topped the charts. At its peak, it was doing 70,000 free downloads a day. He believes it went viral when kids started uploading videos onto Youtube of them shaking their iphones and playing the app.

ScribblePics has a white label app to turn your photos into postcards. They  were able to get partnerships with QANTAS, Jetstar, Perisher, and Contiki Tours. How did they do it? Well Peter Bradd simply got on the phone and called them up. A direct sales approach worked. A few people in the room also had examples of how partnerships benefited them to get more distribution.

There are only some of the tips and experiences that were shared. If you want to know more, you’ll just have to come to the next meetup!

Its on Monday, 3 December, 2012 and the main topic is “mobile advertising”. RSVP here.

2 thoughts on “How to get PR for mobile apps”