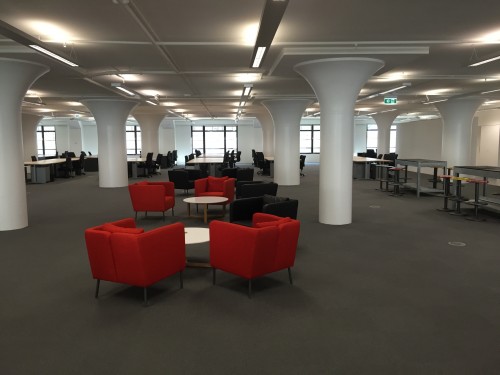 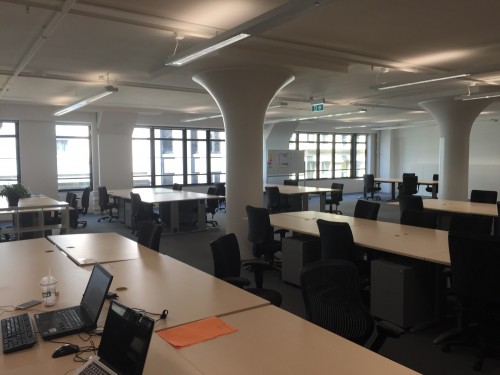 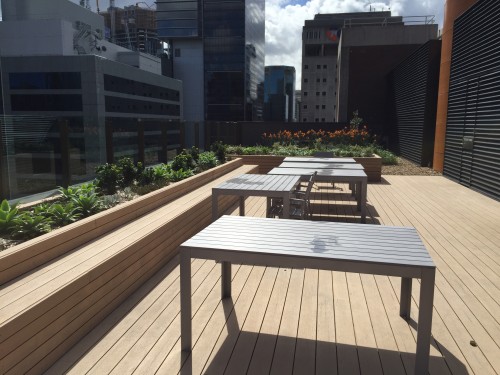 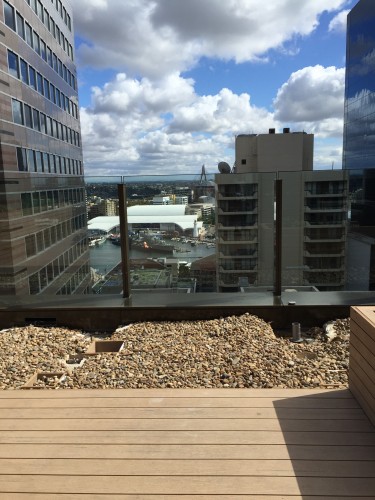 There’s an awesome outdoor area for chilling out, meetings, and friday drinks which the Tyro team uses. The co-working space is on the third level and its new. There’s a few tenants there now but it just opened for business.

So you might be wondering who is Tyro? Not many people in Australia know who Tyro is. In my travels in the startup and technology sector, I’ve come across Tyro a few times. I’ve met several ex-engineers from Tyro now working on their own startups including at Fishburners. I’ve also met mutual friends that work at Tyro. Primarily the people I have met there have been engineers. I’ve also briefly spoken to Mike Cannon Brookes, one of the earlier investors about Tyro when I was pitching at Innovation Bay a few years ago.

“Tyro Payments is Australia’s only independent and fastest growing EFTPOS provider. We serve 12,000+ customers, process over $6.5 billion annually in card transactions, and have tailored best-fit solutions for the retail, health and hospitality sectors.”

Tyro Payments, which originally traded as MoneySwitch, was established in 2003 by three former Cisco engineers who saw an opportunity to take on the archaic technology of big banks. Tyro is Australia’s only independent eftpos provider competing with the major retail banks, and processes more than half of all Medicare claims that go through the Australian Eftpos system. More on their story here on StartupSmart.

The founders started the company because they thought why can’t money be transferred like packets of information – like what they were doing at CISCO. I’ve been told that their technology works faster than some of the other providers out there. It does make a difference in places like duty free stores where a few seconds or a fraction of a second means that the store can process more customers. When you are in a rush to get onto a plane and there’s a long line, faster payment processing time is critical. It can mean the difference between someone buying an item or walking away.

Why have a co-working space?

A co-working space is a place where people can rent a desk and have access to other office benefits. Typically there are other tenants in the same office and they share the space. Its more affordable for a smaller business and less overhead. I work in a co-working space now at Fishburners, which is dedicated to technology startups. Tyro Payments has a similar co-working space for tenants. Their focus is on their industry which is fintech (Financial Technology).

Tyro is looking to develop an ecosystem around them of innovative fintech companies. Besides the benefits of sharing the space with like minded businesses in the same industry, Tyro is taking it one step further with co-development.

My buddy George Samman who works out of Tyro FinTech hub wrote this about it in Coin Telegraph:

As well as co-working, Tyro Payments, an EFTPOS payments company, which processed AU$6.5 billion in transactions for 12,000 customers last year, will select one company per quarter and dedicate resources, banking access and expertise to co-develop open APIs.

Tyro is seeking to help others innovate and disrupt and thereby grow the fintech ecosystem, and will take no equity or fees in return. Companies interested in co-developing with Tyro should ideally work from the Hub during the project. Ideal candidates would have an experienced team, a product on the market and be well funded for their next phase.

I really like this initiative of co-development. It builds the startup and fintech ecosystem. Both businesses can leverage off each other. Its like being in a forest and having a symbiotic relationship.

I also believe having API’s is a great way to foster innovation. I’ve spoken to other businesses about this topic. Create an API and let external parties make things, experiment and come up with new ways to use your service that you hadn’t even thought of.

I like this initiative of company contributing with a co-working space and co-development. Its obviously smart & strategic to have innovative companies around them. Both parties can leverage each other. If you are in the fintech space or targeting fintech sector, definitely take a look at basing yourself at Tyro’s Fintech Hub. Thanks to Sharon Lu, General Manager of Tyro’s Fintech Hub and George Samman for the tour*.

We’re also seeing a lot of innovation happening in the FinTech space. I did a roundup of 15 things that happened in Fintech in the last 12 months. I’m sure you’ll like it if you read this far 🙂

*no credit cards were processed on this tour