Today was an unusual day. Its a Wednesday, hump day so its half way through the week. At about 1030am, I decided to get a coffee from Dana Street Roasters, my local cafe in Mountain View. When I got home, I decided to do my laundry. Then made dinner, cleaned the stove and vacuumed my room. The reason I say its unusual is that I haven’t done these things in a long time. 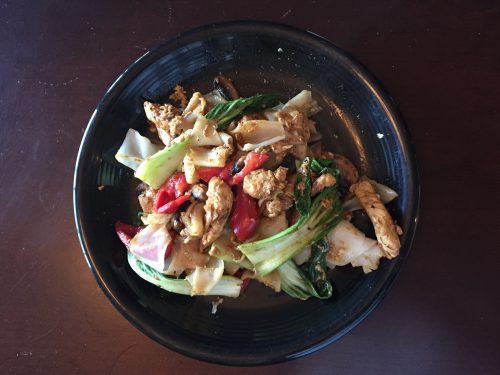 Home made dinner – a combination of random stuff

I realised on Monday night (Day 88), I hadn’t been home in the evening in a while. When I spoke to my room mate, French, he mentioned that I hadn’t cooked in a while. I haven’t been home in the evening in about 3 weeks. Whilst tonight, I could have gone out to join the Aussies in Tech meetup or met up with a friend, I decided I was going to have a quiet evening on Day 90. Its been a combination of co-workers from Australia being in town, meeting new people, visitors from out of town, and doing stuff.

So I decided on Day 90, I needed to catchup on the other parts of my life. Day 90 is also significant in that I’m now 3 months into my journey in America. Its the longest period of time I’ve been in America. In the past few weeks, I’ve been settling in and getting my life organised (or optimised). When you move to a new country, you have to get a lot of things setup. A lot of them are like one-off things. Like getting your social security number. Going to power company to verify your identity because you haven’t been in the system before. Looking for an apartment. Buy house hold goods. Looking for a gym. Getting a bank account and credit card.

I haven’t yet hit normalcy yet. Though its starting to slowly come together. I know the Caltrain timetable back to front now for the morning and evening times. I’ve got my daily commute routine. I have my spot where I wait at the Caltrain station. I know it takes 7 mins to walk to the station and 2 mins to run. I know exactly where the Uber driver should stop so its easier for me to get out and walk home so I can avoid the slope.

On the product side

From the professional side of things, I’ve noticed a couple of things (or not noticed in some cases). There’s a lot more product managers in Silicon Valley – I’m including San Francisco here. Like its not uncommon to meet a product manager. I’ve met several through my Church. I’ve met others through friends of friends. I was chatting to Mick Johnson (ex-Facebook Product Manager Director) after my AMA interview for Sydney Startups. He mentioned that Silicon Valley was the best place to learn about product management. I have no doubt there’s other places you can learn too. There’s def a lot of people working in tech and on products here. Its great, because its what I love to do.

The other interesting thing people tell me is that the pace of Silicon Valley is much faster than anywhere else. To be honest, I haven’t felt that much. In some situations I have. I believe that the environment I’ve been in at work for Atlassian was already fast paced. I’ve also joined a team that I already worked with. So I haven’t felt as much of a change. The other reason is that I ran my own company for 5 years, including a startup for some of those years. So I’m use to being the one that pushed the pace. I always had that mentality of speed and quick iteration.

I’ve learned not to doubt as much. Over time, you get jaded by startup ideas and startup people. Its the “I’ve done that before and it didn’t work”. Or “I know someone that tried that and it failed”. There was a profound moment last week, where I met someone working on an app. I was like not another app and rolled my eyes whilst also getting excited at the same time by seeing an impromptu demo at a bar. It turns out that this person had worked at a well known company that helped pioneer some of these technology. I had started to become that negative person in the room. Someone had mentioned that to me back home in Sydney. I thought of many reasons why it was going to fail rather than why it could succeed. Perhaps there’s a lot more optimism in the Silicon Valley air (or the fog).

Yesterday was also Prime Day from Amazon. I actually had no idea when I got the email. I assumed it was another day where Amazon sent out an email about their special deals. It turns out after speaking to someone later that evening, its like a new day they created to rival Black Friday with big discounts. So I went home and bought a few items that were discounted. Apparently its the first time they’ve done it. The receptionist asked me if I ordered anything. He figured he’d ask me what I bought because my “Amazon game was strong“. I’ve discovered Amazon Prime and its great 🙂 Amazon in general is amazing because its “the everything store”. It has like everything you need.