The keys to success for living in the Bay Area is layer management. The Bay Area has a lot of microclimates. So when I travel from the city (San Francisco) to South Bay, the climate is very different. It could go from windy to sunny. Or very cold to cold. Also when I get on the Caltrain, it’s much warmer inside. I need to be able to remove layer of clothing easily in a confined space.

Right now, I’m rocking this sweet Airtasker jacket I got from Tim Fung and Sarah Maloof from Airtasker. It’s a UNIQLO jacket with their logo emblazoned on the front. It’s perfect for this weather and commute. As it’s an external layer that can easily be unzipped or zipped up. I can easily carry it or stash it in my backpack quickly and compress it down.

In addition, it is waterproof which has been great as it has been raining in the past week. The condition was that if I got the jacket, I would wear it in Bay Area. Happy to do so! I knew it had to be slightly bigger so I could fit another layer underneath. It’s also reversible and has a different look when turned inside out.

Here’s what I looks like whilst waiting for the Caltrain. Notice the mean looking face because it’s freezing. Mean mugging! 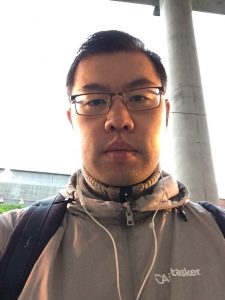 In this second pic you see the second layer underneath, which is a sweater that can also be easily unzipped. There’s also a much happier face because I’m on the Caltrain which is warm. It’s also the Caltrain not the BART (more on this another time). 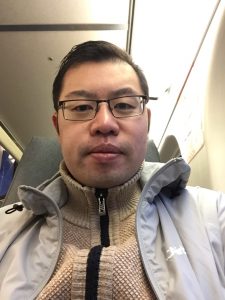 In Australia, I’d call it a jumper or cardigan. In America, it seems that everything is called a sweater for an outer layer such as a hoodie, jacket, jumper, or cardigan. It’s one of my favorite sweaters. I bought it off Amazon. The pockets are weak though and have holes in fabric. So I don’t use them. I only have sweaters that have zips in my wardrobe. I bought a few different ones of Amazon. If it’s warm on the Caltrain, I might remove both layers.

I have seen people wear vests which I might get. Though I don’t see the point of them since they don’t have sleeves. What it does allow you to do is remove a layer quickly. You can transition from casual to business casual very quickly if you have a buttoned up short underneath. I heard it’s popular with Venture Capitalists because you can switch from talking to startups in tshirts to business/finance folks in suits. Also if they are travelling, it can deal with different climates. My key principles are

To recap, layer management is the 🔑