During the Christmas Holiday Period, the iTunes Connect store shuts down. This has an impact on app developers and app marketers. Its also the time when the app store experiences peak downloads during the year. I’ve written a blog post over at the Tapmint blog (my consultancy) which explains in more detail why it closes down and how you can prepare for it. Read more here.

Easily one of my favourite speeches. Everything can be summed up into this: “its a game of inches”. Whether its startups, football, life – the person that’s willing to go that extra inch will succeed.

In my last post, I gave a preview of my talk for the Advanced Online Marketing Training session. Here’s the final presentation for “Advanced App Store Optimisation Tips and Tactics”.

If you have any questions about optimising your app store marketing let me know in the comments below and I’ll answer them! Also if you are looking to develop or design an innovative app/website, reach out to us at tapmint.com.

Really looking forward to speaking at this event tomorrow called “Advanced Online Marketing Training Course”. Check it out here. There’ll be 6 speakers tomorrow, who are good contacts in the Online Marketing industry which I have a lot of respect for. Many of whom I met at the Sydney SEO meetup and are experts in the industry. The course is organised by James Norquay of Prosperity Media.

I’ll be speaking on “Advanced App Store Optimisation Tips And Tactics”, one of my favourite topics. I’ve spoken about this topic before at Product Camp in 2012 and Sydney SEO meetup in 2013. The world of mobile / technology keeps changing so I had to update it for iOS7. I had actually presented previously as iOS6 was coming out, and had to update the slides for iOS6. In addition, I added some new examples and new developments as well to keep it relevant.

I’ll be covering the following areas:

In the meantime, here’s a sneak peak at the updated slides: 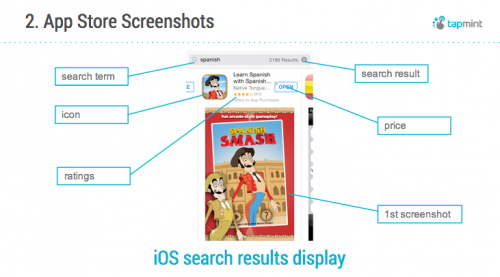 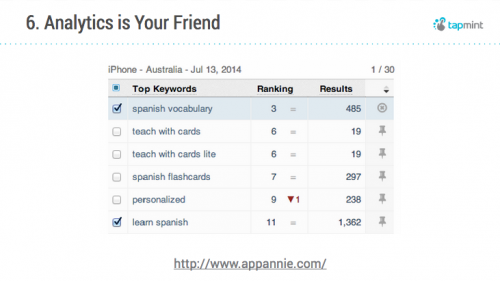 I’ll also be speaking in two weeks for Founder’s Institute (FI) Sydney on a panel for “Branding and marketing”. I’m a mentor for this semester’s FI.

I visited the new HackerLabs co-working space. The space is located at 35 Buckingham Street, Surry Hills which is a 2 minute walk from Central station. Its a great location since its so close to a major train station, and there many agencies and startups in the area. John Yueh from Beaconmaker invited me and was a great host. I also had the opportunity to interview one of my friends, Taylor Luk from Issue. Check out this video I made about HackerLabs below.

HackerLabs is looking for more startups to take up residency in their co-working space. Its also very close to nearby basketball courts. There’s a rec club nearby where you can also hire tennis courts and a ping pong table too! I played ping pong with the HackerLabs crew. John has a killer ping pong game so watch out :p

Here are some video highlights of my trip to the US. I never would have got around to putting this together and as a social experiment I wanted to see what someone else would see as my highlights. So I outsourced the task on Odesk! I posted this task on Saturday and got this delivered on Tuesday night. Pretty happy with the result!

As I filmed it on my iPhone in portrait view, there would have been black bars on the side. An effect was used on the sides of the video which is described below:

“Not sure if the effect has a name, but to create it all you do is make a copy of the video, place it on the underlying track, scale that copy to fill the screen, and apply a blur until it looks nice.

Having done that the background will be exactly the same as the portrait foreground, just blurred out and scaled up. I’ve seen this technique used both for portrait phone videos and older SD footage when used in an HD format. Usually in news programs or documentaries.

I watched this video last night. Its actually the third time I’ve watched it. Its that good. Its Chamath Palihapitiya on “How facebook got on the path to 1 billion users”. He was the former VP of Growth at Facebook, and now is the founder of Social+Capital, a VC firm. Its easily the best talk I’ve seen about startups. Its a no-holds barred look at growth and product.

In essence, these are the 3 things a startup must do:

2) Get users to experience core product value as soon as possible. This is the “AHA” moment and it needs to happen in seconds.

3) Get the largest % of our target market to experience core product value as quickly as possible. This is the definition of growth.

For Facebook, the AHA moment is getting a user to 7 friends in 10 days. When this happens, the user can experience the magic of Facebook. When they have this minimum number of connections they will be an active user and it will tie them into the platform. Hat tip to my buddy Jason Allan for finding this video and his post on product is the key to growth hacking.

I also like this image summary by Brian Balfour which summarises it nicely  in “product vs marketing vs growth“. 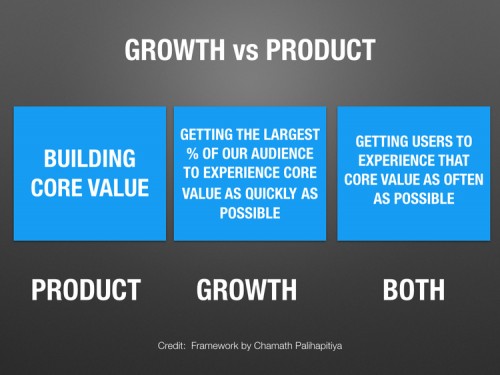 I’ve been reading about Twitter having issues with retaining users. They’ve been able to get 1 billion people to sign-up but only 25% are active. The biggest issue I see is around experiencing that “AHA” moment. When they on-board new users, its actually quite difficult to figure out what it does. I signed up and tried it out in mid-2007, but I didn’t get it. It wasn’t until 6 months later, I signed in again but I still didn’t have anyone to talk to. The AHA moment for me, was when a friend I was following posted a public tweet, and I responded to my friend immediately. She then responded back instantaneously. I was like I get it – you can post a public status update and anyone can respond. As you follow more people and see what they are saying, and start following brands, celebrities it builds more density in the network to tie you in. 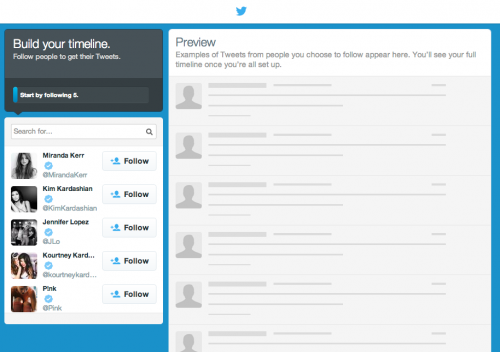 Josh Elman, who worked at Twitter provided this insight on the “only metric that matters“:

So not only does twitter need to communicate to you how to use the service and get you to that core value proposition in seconds of you signing up, it also has another focus – getting you to visit at least 7 times. Once it can do that, knows that it has you. You’ll come back again, and again because you’ve experienced core product value.

A user needs to experience that AHA moment as soon as possible, and as many times as possible. The best experience I’ve had regarding this was using Uber in San Francisco. Being able to connect my credit card, then order a ride at the push of a button. A car came within 5 minutes to pick me up. That is a killer AHA moment. To know that I have the power to be able to hail a cab whenever I felt like it. In essence, as Uber’s slogan prescribes “my own private driver”. The whole process was seamless from when I ordered the cab to getting inside and then to my destination. I didn’t have to pull out my wallet to pay for the ride. It was effortless. 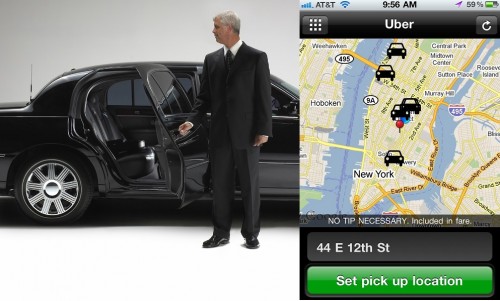 I experienced this AHA moment multiple times whenever I ordered the cab and took a ride. In fact, I used it everyday, sometimes 2 or 3 times a day. I probably spent about $400 USD on Uber rides in my one month in San Francisco. Not only did I experience it, I wanted to share the experience with my friends. I invited my friend Kiran and referred him as I was able to get a $20 credit. I did the same thing with Lyft as well. We were part of the growth engine. Getting more users to experience the AHA moment. They in turn experienced the AHA moment, and referred more people to get the credit and because they loved the service.

One of the startups I’ve been helping out is PIXC which is part of Telstra’s Muru-D accelerator program. Its a service that removes the background in an image. Its particularly useful if you have an eCommerce store. If you look at any eCommerce store today, the background has been removed and it has a white background. Here is an example of ASOS’s pages for daily new products. 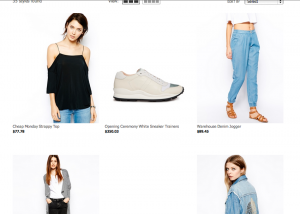 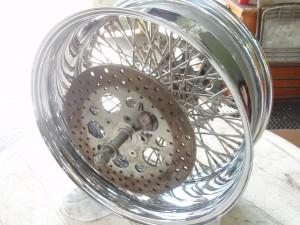 Within a couple of hours, I received an email in my inbox with a link to download the image below. That was the AHA moment. When I looked at the new image and thought wow, someone did this so quickly. If I had tried to do it myself, it probably would have taken at least two hours if not longer. Images could be done for $2 a piece and I thought “well if I was doing this it would definitely cost more than $2!”. 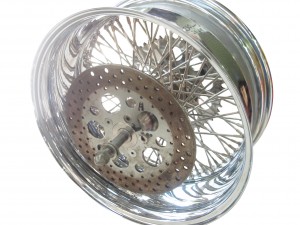 I also tried out a few other variations like with this profile picture below. 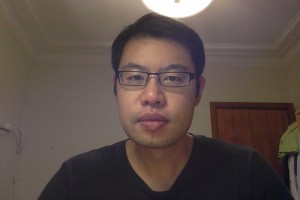 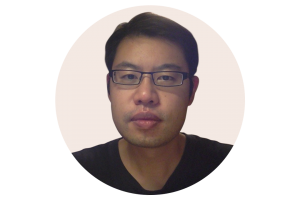 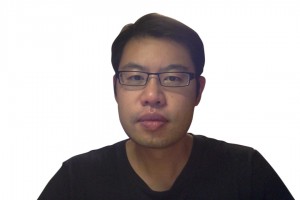 Getting this image back in the same day made me experience another AHA moment.

More on the AHA moment

A lot of startups celebrate the fact that they have X number of downloads (thousands, millions), registrations, page views etc… But this is broken. Its a vanity metric. Savvy people know that it doesn’t mean jack. It does mean something – you can generate demand. However the rest of the experience needs to live up to it. Its a short term view to focus on things like downloads and registration, and getting more people to download. We need to be focusing on 1) building core product value 2) getting people to experience that value as soon as possible.

Its analogous to building up a line-up of people outside the opening of a new nightclub (hype). When you get inside, its dark, the music is bad, the drinks are expensive, decor is horrible, and worst of all its actually empty (wait…aren’t most nightclubs like this?). There’s no point shoving more people into the top of the funnel (i.e. getting more people to line-up) if the rest of the experience doesn’t match it. Those customers are likely to leave and never come back again, and will not refer anyone. In fact, they’ll tell people “I had a horrible experience with that product/venue/service and I wasted my time and money on it”. This will hurt you in the long run.

If we can get the user to have an amazing experience with our service, an “AHA” moment, we can get them to come back (retention) and to recommend it to their friends (referral). We need to be removing all barriers to getting to AHA, and enabling the user to get there as quickly as possible. Then get them to experience it as many times as possible, and having them spread the word about it.

I’m out like the Charlotte Bobcats in the playoffs,

My latest episode of Matthew Ho TV on YouTube. Check it out here: